Please read the complete article .
We also have Fatwa of Sheikh Ibn Taymiah on this issue , for our wahabi friends.

The defenition of a ta’wiz is simply a written du’a from the Qur’an or ahadith, and is for the one who cannot read or has not memorized that particular du’a. It is written on a piece of paper and is worn around the neck.

We, the Ahl as-Sunna, believe that to wear a ta’wiz around the neck is permissible if the du’a’ contained in it is written from the Qur’an or ahadith. Prophet Muhammad (may Allah bless him and grant him peace) used to recite du’a’ and then blow onto the sick person. The Companions of the Prophet (may Allah bless him and grant him peace) also did this and they wrote the du’a’ on a piece of paper and placed it around the neck of a person if they could not read it. Of course, the du’a’s from the Qur’an and ahadith have the power to heal the sick. Some people say that if you wear the ta’wiz you are commiting shirk, but we shall prove, with the help of Allah, that it is permissible to wear a ta’wiz.

The Qur’an Has the Power of Healing

Allah Most High says in the Qur’an:

Qadi Shawkani writes,“If the Qur’an’s du’a’s are recited and blown on the sick, they will be cured.When the non-believers recite the Qur’an, their blasphemic disease will be cured”

“Amr ibn Shu’aib (may Allah be pleased with him) said that ‘Rasulu’llah(may Allah bless him and grant him peace) taught my father and grandfather a du’a which we would read before going to sleep, to protect us from fear and anguish.We told our elder children to recite this du’a before going to sleep as well.But for those children who were not yet literate, we would write it and then put it around their necks”

“When a person who was sick or in some distress they would go to the Prophet (may Allah bless him and grant him peace) who would then place his hand on the area of pain and recite a du’a’ and then blow onto him”
[Bukhari; Muslim, Chapter of Tibb]

From the above narrations, it proves that to blow after reciting du’a’s onto the sick is Sunna and the more pious the person is, the more healing power he has because he is blessed more than the less pious.

“It is permissible to [to recite du’a’s and then] blow upon the sick in Islam, but the words must be from the Qur’an or ahadith. If the words are not, then it is not permissible”

[Ibn Taymiyya, At-Tawassul, Chapter on Blowing onto the Sick]

Questions
Q) Some people ask, ‘How is it allowed to blow dua’s onto the sick when some ahadith say this is forbidden?’

Answer
A) Allama Sa’idi has written the answer to this question in great detail; he has also included the opinion of all the other great scholars, and we will present this here.

“The former type of hadith refers to the prohibition of having read something that is not from the Qur’an and Sunna [i.e.something that has pictures, diagrams or words not from the Qur’an or Sunna] and then blow upon someone. The latter types of ahadith which permit damm refer to those kalimat [words or verses] which have been taught by the Prophet (may Allah bless him and grant him peace)”

In the same way as above there are two types of ahadith concerning ta’wiz. There are many narrations that forbid the use of ta’wiz and also many permitting their use.

Imam al-Qurtubi wrote in detail about both types of ahadith concerning ta’wiz:

“The ta’wiz that are forbidden are those ta’wiz from the Time of Ignorance – ]those which are satanic and contain an element of shirk [mantar, voodoo and magic, etc.]. The ta’wiz, which are permitted are those written with du’as evidently from Qur’an and ahadith only”

Here are the narrations which show the permission for one to wear a ta’wiz around one’s neck:

Allama Alusi al-Hanafi, in his Tafsir of the Qur’an, writes:

In the name of Allah, Most Compassionate, Most Merciful,
Hanging or wearing of amulets (ta’wiz) is normally permissible for protection or healing provided certain conditions are met:

1) That they consist of the names of Allah Almighty or his attributes;

2) That they are in Arabic;

3) That they do not consist of anything that is disbelief (kufr);

4) The user does not believe the words have any affect in themselves, but are empowered to do so by Allah Most High.

It is narrated from Amr ibn Shu’ayb, from his father, from his grandfather (Abdullah ibn Amr ibn al-Aas (Allah be pleased with them all), that the Messenger of Allah (Allah bless him & give him peace) used to teach them (the Sahabas) for fearful situations the following words:

“I seek refuge in Allah’s perfect words from His wrath, the evil of his servants, the whispered insinuations of devils, and that they come to me”

(narrated by Abu Dawud & Tirmidhi, and Tirmidhi classed it as an authentic narration).

In the Musannaf of Imam Abu Bakr ibn Abi Shayba, the permissibility of hanging Ta’wizes is reported from many of the Companions and early Muslims (Salaf), including: Sa’id ibn al-Musayyab, Ata’, Mujahid, Abd Allah ibn Amr, Ibn Sirin, Ubaydullah ibn Abd Allah ibn Umar, and others (Allah be well pleased with them all). [See: al-Musannaf, 5.439].

As for that which is reported from some, including Ibn Mas’ud (Allah be pleased with him), that hanging Ta’wizes is shirk, this is understood to mean those Ta’wizes that resemble the one’s used in the days of ignorance (jahiliyya), or if used thinking that it is the ta’wiz itself that cures or protects, not Allah, or if it contains impermissible invocations or one’s whose meaning is not known.

Imam Ibn Taymiyya (Allah have mercy on him) writes in his Fatawa:

“It is permissible for an ill or troubled person, that certain verses from the Qur’an are written with pure ink, then it is washed and given to the ill to drink.Ibn Abbas (Allah be pleased with him) is reported to have mentioned a certain Dua that should be written and placed close to the woman who is experiencing hard labour at the time of giving birth.

Sayyiduna Ali (Allah be pleased with him) says: This Dua should be written and tied to the arm of the woman. We have experienced that there is nothing more amazing than this” (Fatawa Ibn Taymiyya, 19/65).

In view of the foregoing, it becomes clear that generally using of Ta’wizes is not something that is impermissible or Shirk. However, it is necessary that the above mentioned conditions are met.


Today we have people who are victims of immoderation. There are some people who declare all types of Ta’wizes to be Shirk and Kufr.

Others, on the other hand, think Ta’wizes to be everything. Both these types of understandings are incorrect.

Using of Ta’wizes is permissible, but with moderation. Normally it is better to recite the Duas which are prescribed for every problem and illness, and along with that resort to medical treatment. However, if Ta’wizes are used sometimes, then it is permissible.

If there is a fear that a person will begin to think the Ta’wiz to be effective in it self, then he should not be given the Ta’wiz. This will be the decision of the person who is giving the Ta’wiz, and not for us to decide for him.

There are many people who never make Dua and are neglectful of the Shariah injunctions, but always depend on Ta’wizes. For such people, it is better not to give them Ta’wizes, rather to direct them to the straight path.

Once, a sister asked me(Who Creates the Proofs and i copy n paste here from his blog)( Not me haan)

to mention to her a Dua or write something for her in order to get married to someone she desired, and she also mentioned that her Duas were not being answered.I asked: “Do you cover your self when you emerge out of your home?” no, was the reply. I said: “Do you perform your Salat (Prayers)?” Again, “no” was the reply. I said: “From tomorrow, you make this special Dua after the Fajr Salat, and you carry on performing this for 6 months, and Insha Allah your Dua will be accepted. Also a very Important Ta’wiz is that you recite a certain Dua and blow on your scarf and wear that scarf when emerging out of your home”!

In conclusion, generally it is permissible to use amulets (ta’wizes) in compliance with the conditions mentioned above. However, if there is something that is impermissible, then it will not be allowed.

The proofs from Sheikh ul Islam of Salafis and Ibn Qayyim who would indeed turn out to be Mushrikeen on many matters (i.e. according to the salafi definitions of course)I would like to add these proofs

Translation: Narrated by Abdullah Ibn Masud (ra) that the Prophet (Peace be upon him) said: Make use of the two cures i.e. the honey and Quran [Sunnan Ibn Majah Volume No.2, Hadith No. 3531]

Some of our rightly guided ancestors stated that there is no harm if some ayat (Verse) from the Qur’an were written in ink and then washed with water and that the sick person drinks that water. Mujahid issues a statement to that effect and so did Abu Qilabah. It was also reported that Ibn ‘Abbas once commanded that two verses from the Qur’an to be written for a woman who had hard pregnancies and that the verses were then washed with water and she was to drink the water. Also Ayub said, “I saw Abu Qilabah write some Verses from the Qur’an wash it with water and then give the water to a person who was suffering from some type of illness to drink it [Tibb an Nabawi by Ibn Qayyim, Page No. 154, English version]

In the Musannaf of Abu Bakr ibn Abi Shayba, the permissibility of hanging a ta`wiz is reported from many of the Companions and early Muslims (Salaf), including:

Translation: It is narrated that Sa’eed bin Musayb (one of the top ranking Tabi’i) was asked about wearing Amulets, he said: There is “No harm in doing so”

Imam al Ata (rah) the Tabi’i and Faqih of Makkah said: There is no harm in hanging (ayahs of) Quran (around the neck) [Musannaf Ibn Abi Shaybah, Volume No. 5, Page No. 439]

Then they will not harm him.” So, Abdullah ibn Amr used to teach this supplication to his grown up children. And, he wrote it down on something and hung it on the neck of those who had not attained puberty. 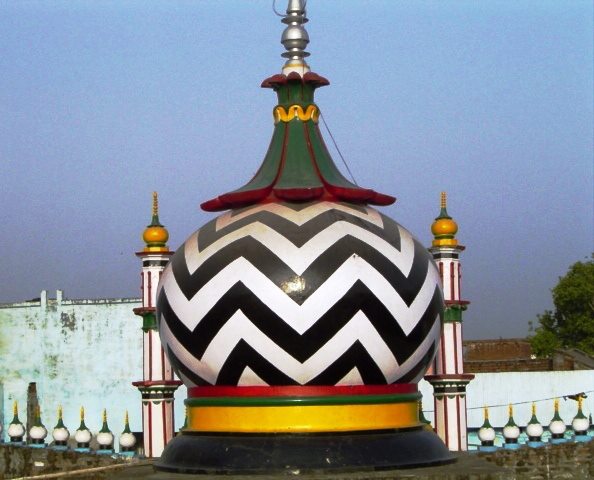 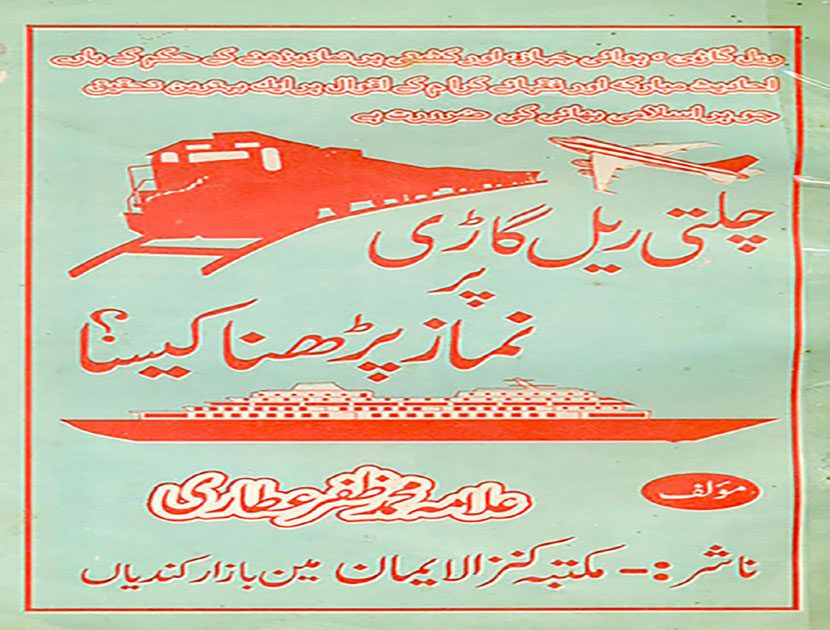